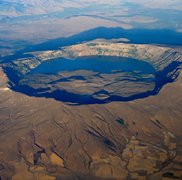 Armenian Highland was formed as a result of geological processes that underlie the formation of mountains. The sea level gradually decreased, and the rising geosynclinal grew into a mountainous country. During that time the strata got distorted and fragmented forming fold mountains. All these were accompanied by powerful volcanic eruptions.
The geological phenomena underlying the mountain formation processes continue in our country till today and the best evidence of that are Tondrak and Nemrut (Sarakn), which are active volcanoes.

The height of Nemrut is 2935 meters (3050m in old sources). It is a young active volcano. Hot gases, waters, and vapor is coming out from its slopes and crater.  The crater of Nemrut is the largest in Armenian Highland with a diameter of 8 kilometers. After the Nemrut tour, having climbed the mountain, one can notice on the western part of the crater, at the height of 2500 meters is expanding the crater lake with a surface area of 9 square kilometers. Previously this volcano released basaltic lavas which eventually enclosed the concavity of Lake Van and resulted in the formation of the lake.

Tondrak is a large volcano the height of which is 3533 meters. Numerous hot springs are flowing from the crater of this volcano. According to Élisée Reclus (geographer), the crater of this volcano has a depth of 350 meters. He also claimed that the geologist Taylor witnessed the geyser. Although there are no geysers now, there are dozens of hot creeks and gases pouring out as a result of perpetuating terrestrial forces. The mountain was called Tondrak since it is similar to an Armenian tandoor (tonir). Historical records indicate that the volcano was intensively activated in the 1550s and the last volcanic eruption took place in 1855. The southern side of Tondrak is divided by the river of Berkri and its tributaries. There are several signs of ancient icings on the top of the mountain.

Source: https://www.armgeo.am/en/armenian-highland-active-volcanoes/
Information
Users of Guests are not allowed to comment this publication.