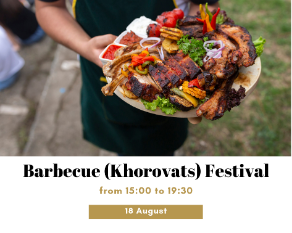 Pan-Armenian Barbecue Festival has been held since 2009 and its main purpose is to make the Armenian version of the barbecue popular, as well as to make popular the Armenian touristic unrecognizable zones. Initially the Barbecue Pan-Armenian Festival was held in Akhtala, and in 2016 Akhtala was recognized as the capital of barbecue. The barbecue festival is a competition-festival and exhibition-sale.

It is planned to organize 4 zones during the festival:

Competitive dishes will compete in the following categories: The festival guests will have the opportunity to taste different types of barbecue and participate in the artistic part of the festival. Volunteer teams and interested non-governmental organizations will also be involved in the festival, who will present the pavilion activities and screenings to the festival guests in Armenian and foreign languages. It is expected that the festival will bring together the best representatives of the Armenian culinary sector, interested representatives of the arts and ethnography, as well as residents and tourists.

The artistic part will last from 3 to 4 hours

For reference call: +374 98 63 13 39
Information
Users of Guests are not allowed to comment this publication.